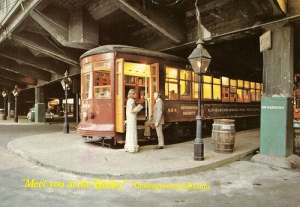 My friend, Eric, posted about the London Underground Railroad today, and it got me thinking about underground places in cities…

Back in 1973, I visited Atlanta, and while I was there, I had the pleasure of visiting Underground Atlanta. I was saddened to hear that in 1980 they closed it down during the construction of the MARTA rapid transit line and “other factors” which, at that time, I had heard had to do with safety of visitors. I was worried they would never open it again.

Other factors noted in the wikipedia posting about it under the Decline and second era section:

The heyday of Underground Atlanta lasted for only half a decade. When neighboring DeKalb County relaxed their restrictions on alcohol consumption in the early 1970s, new bars sprouted up in other parts of the city, generating competition. The dress code restrictions were dropped and fights began to break out. The construction of the MARTA East Line beginning in 1975 tore out several blocks of clubs and eliminated parking. Crime became uncontrollable and the area was considered dangerous. In 1980, Underground Atlanta was closed. A few businesses struggled to stay open but by 1982 they left and the area was once again abandoned.

But I was happy to hear that they did re-open it in 1989, see History of Underground Atlanta here:

Underground Atlanta was reopened in 1989, at a cost of $142 million, through a joint venture between the City of Atlanta and private industry. It was redesigned to be one of the major projects aimed at preserving and revitalizing the center of Atlanta as the focal point of community life. Today, Underground offers a complete family experience, with retail shops, specialty and gift shops, fast food in the Old Alabama Eatery, unique features and entertainment, special events and fine restaurants.

It was a wonderful place to visit, so I was happy to hear that they have re-opened it and revitalized it and most importantly tried to recapture the historical significance of Underground Atlanta!

It is so cool to visit old historic places like this.

At some point I will post about the Endless Caverns that we visited on one of our camping treks that was a wonderful place to visit that is also underground! Love caverns!

Total Eclipse of the Sun